16.09.2014 Mountain running organized by the Greyhound Club. (Competition called Beauty and Performance.) The event started a day earlier. On Saturday there was an exhibition of all breeds and the running race followed the next day......read article

27.9.2013 All puppies have already new owners. And in 6 months they look like this.
CAROLINA KLÜFT and CALVIN SMITH 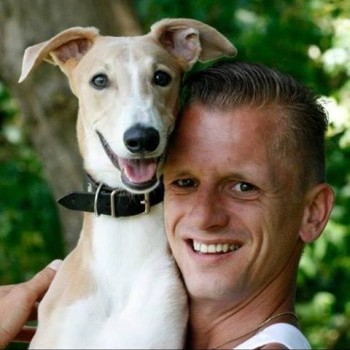 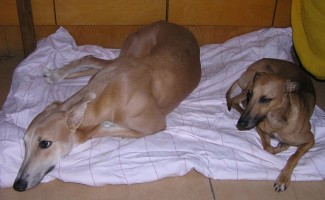 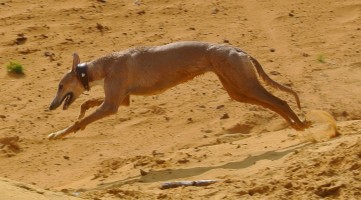 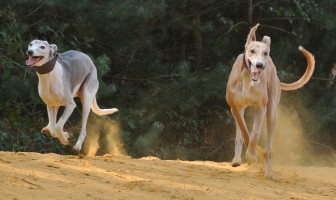 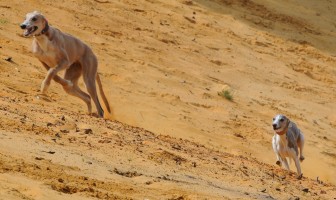 25.8.2013 All puppies have already new owners. And in 6 months they look like this.
"Kája" Carl Lewis with "Barýsek" and Keeva" Cathy Freeman 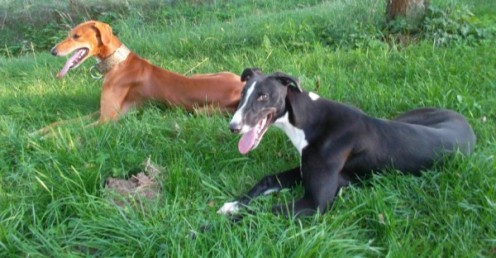 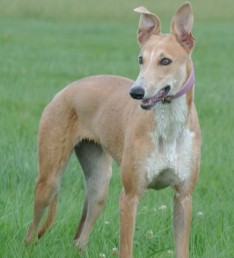 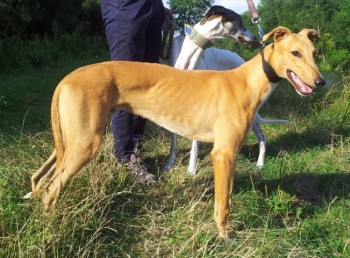 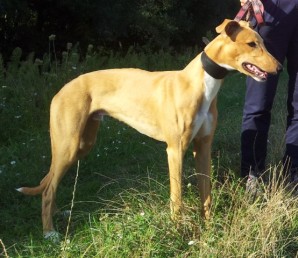 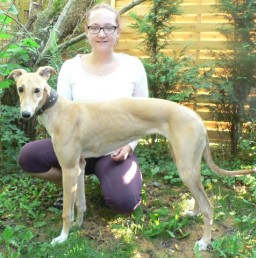 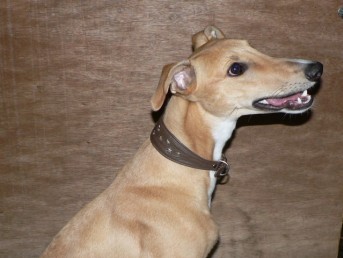 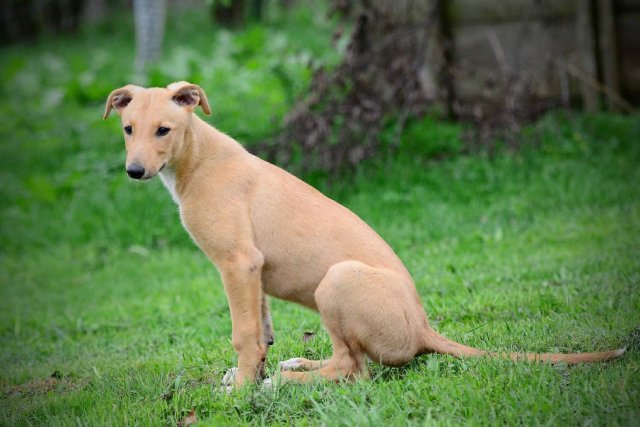 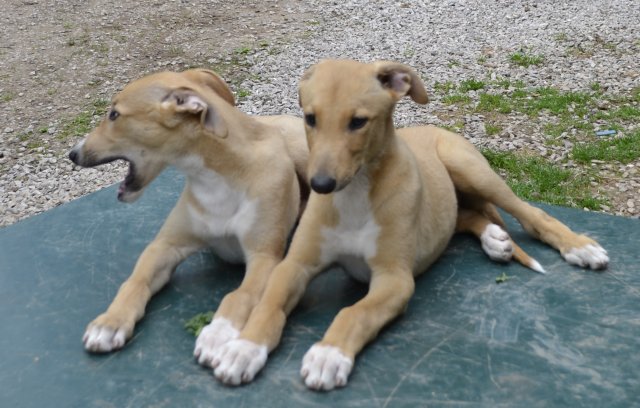 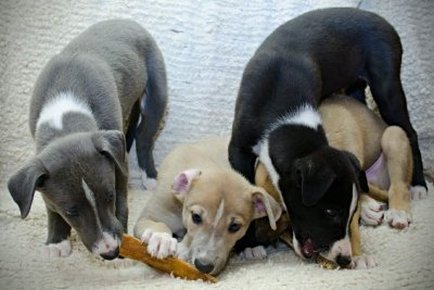 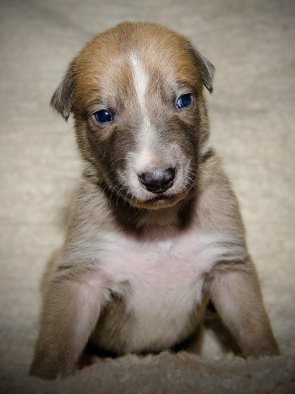 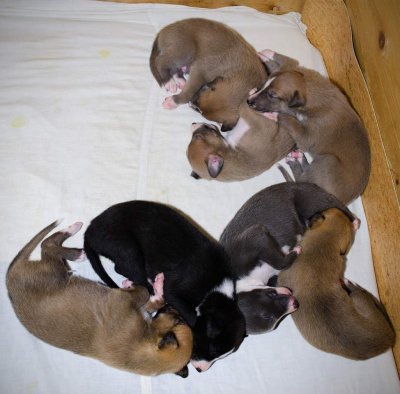 15.2.2013...and more pictures this time in better resolutio. After one week the puppies have above 600g with one exception which is already about 800g. C-litter 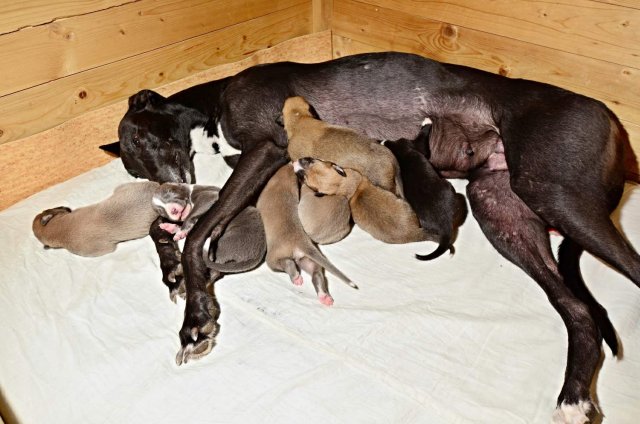 Puppies for sale - pre-reservation of the puppies. 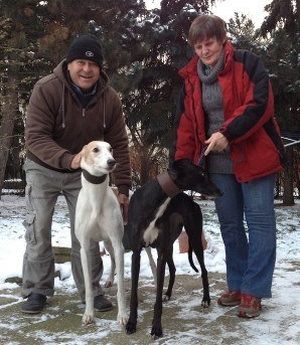 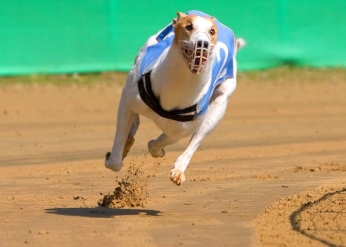 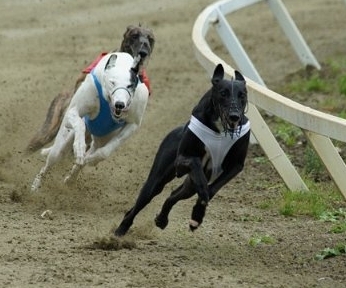 15.12.2012 PREMARKET CHANCE, and her results, was on December 8th 2012 mated with ORSON VOM MONARCHENHÜGEL, and his results.

02.02.2011 Sarcoma In last 6 months I did not published any article on my web pages. In the middle of last year my greyhound Abigail started to hobble with right forefoot. My first idea was it is a pulled or torned muscle. So she was idle but the improvement did not happen. In the vet clinic I got the diagnosis...read article

02.06.2010 Results and pictures from last racing. More pictures you can find picasaweb and rajce.net

22.04.2010 Greyhound racing in Macau In touristic maps is the greyhound race track mentioned, even with small advertisement. For the admirers and fans of greyhound racing it is obligatory to come there. Anyway compare to the other sightseeing places like casinos, betting... Read article, photo

26.02.2010 Tonicek One weekend in November 2009 we got new arrival. A small dog, size of a whippet, with lovely look, simply small dog to feather bed. He still had milk-teeths so we thought he in not yet one year old. My daughter Pavla ride a bike... read article

26.01.2010 Racing autumn 2009 The latest arrival of our breeding station, BENTE SCARE Grefina and BECKIE SCOTT Grefina, were November 11th 2009 exactly 2 years old. At this age the running carrier should be started. What´s more I have as well promising bitch from Ireland WINTER JOY... read article

20.01.2010 The Scooter I have dogs which like moving and my chances to let them run as they wish and need are limited. In the past I ran with them quite often but with the age my performance drops. It is impossible to compare my speed with their possibilities. I tried as well to ride bicycle with them which is... read article

26.08.2009 In Photogalerie you can find few pictures from Slowak Championship and results from Slowak Derby, in Ivanka pri Nitre. Both races won BENTE SCARE GREFINA and where WINTER JOY and BECKIE SCOTT GREFINA proved their good performance as well.

02.09.2009 On Sunday Sep 6th from 10am we organize races for whippets. On Saturday Sep 12th there is Greyhound racing - Hippolit Cup for greyhounds only. Later in afternoon Greyhound meeting. Greyhounds from adoption are welcome as well. Other breeds are limited and must be registered via email until Sep 7th.

15.08.2009 Results from Saturday´s races of whippets organized by breeding station Ayort Back. On Sunday we slightly changed the time schedule...Read article

Attention!
Date of Summer price and training were change to 2. August!

12.05.2009 Pictures from Spring race are now available. More pictures you can find here.

21.02.2009 In previous articles we wrote about irish greyhound industry. Following article proves it is not only a word but real part of irish agriculture with real figures e.g. yearly value of greyhound industry and number of registered puppies. 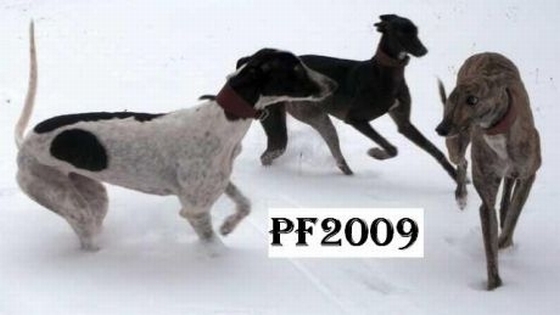 Updated 28.10.2008 Starting list of greyhounds and start list of whippets for the IV. Kresin hill. Results of greyhound races and whippet races.
Web pages of Czech Greyhound Racing Club - CGRC you can find:

24.09.2008 Updated On Saturday September 20th next race Hippolit Cup is planned. Only greyhounds can participate in this race so we start in the afternoon. Well known namen in list of participants can guarantee high quality race. For Hippolit cup there were this time...

26.08.2008 In photogalery you can find few pictures from races and greyhound results. Whippet results will be updated during this week. You can visit new section Results as well.

20.08.2008 Attention - updated End of August - exactly 24. August - you can come to Kresin to participate on next race. See map how to arrive this time. List of participants and time schedule in categories greyhound and whippet.

14.06.2008 Results from the last race are ready - greyhounds and whippets. In photogalery you can find pictures (Author JP) as well.

25.05.2008 Next event is coming on 7. July 2008. Race start, registration and all other things same as usualy. Detailed time schedule will be prepared based on number of participants.

25.05.2008 The last arrival into our breeding station is bitch from Ireland with the name ELITE JOY.

30.01.2008 Greyhound is hunting dog In the last time I can hear for me quite a lot unbelievable news. For example an announcement that a totally quiet greyhound - no hunting, no lead necessary - to be sold. Our first greyhound Jurasek was - after the death of his owner... read more

Our breeding station has perfect conditions for puppies. Puppies need three basic presumptions for future excellent performance - pedigree, well-ballanced food and enough possibility to move. We can guarantee all of them... read article

We mentioned topic of race tracks and safety race tracks on this pages already more times. There are many opinions and ideas what is the best for greyhounds, what is still possible, what is not enough, etc. To everybody who is interested in this topic we can recommend ... read article

Everybody has to realize that greyhound is a very powerful dog and an excellent sprinter. When I bought my first greyhound I had only few experience with obedience and so I decided to go to training-ground. Among other things the defense was practiced. We... read article and enquiry 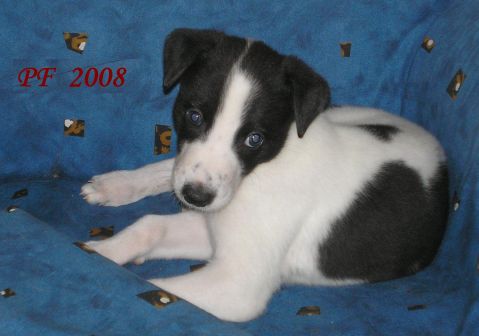 Mather of the puppies AGLAIA Grefina is from A litter (5 puppies) of our breeding station. SEANS ROLLER (AGLAIA's mather) imported from Ireland started with her career on racetracks very late. But even when four years old she won lot of races and awards from... read article